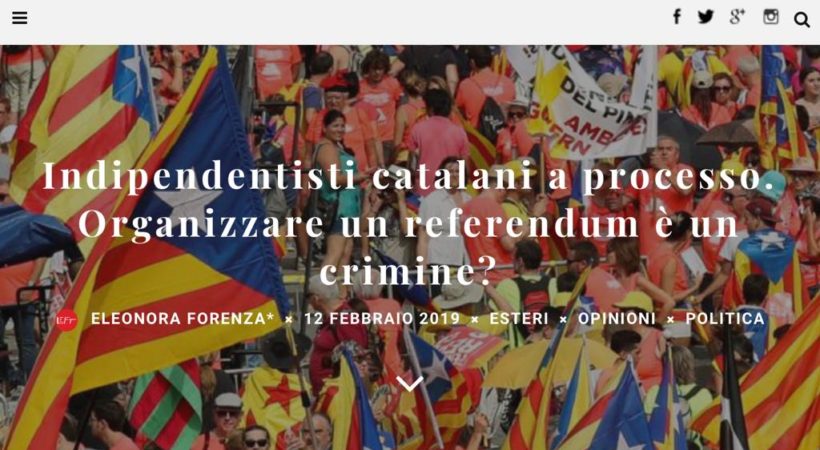 On the occasion of the beginning of the 1rst October trial, starting this morning in Madrid, in which 12 Catalan leaders will be judged for having organized a self-determination referendum, members of the EU-Catalonia Dialogue Platform have published a joint opinion editorial denouncing this political trial in 8 EU Member States’ newspapers.

The op-ed, entitled “This is a political trial” aims to denounce the current situation of Catalan pro-independence political and social leaders, who after more than a year of pre-trial detention, are facing today an indictment that may lead to sentences of up to 25 years of imprisonment.

By spreading the word on different European newspapers, the platform is sending a powerful message: “We reject the false narrative behind the accusations, and we denounce that, yes, this trial is a political trial. Dialogue and negotiation, not imprisonment and criminal prosecution, should have been the instruments through which Catalonia’s legitimate and democratic right to self-determination ought to have been channelled“, they claim, adding that this political trial is not an internal Spanish affair, and they will be following with attention the development of the judicial proceeding.

Stating that the Catalan case is putting at stake EU fundamental rights and values, the article encourages European Institutions to pursue a dialogued and political solution to the conflict: “Catalans have a legitimate right to democratically decide their own political future, and Madrid and Brussels need politicians with the courage to settle political conflicts not with criminal charges, but with the tools of democracy”.

The article has been published, among others, in: