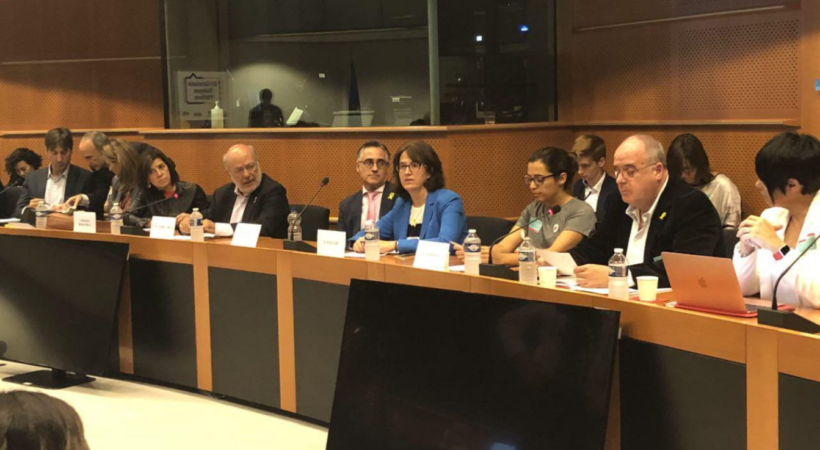 Representatives of the Basque Country, Catalonia, Scotland, New Caledonia and the Faroe Islands speak in a conference organized by the EU – Catalonia Dialogue Platform

While exercising the right to self-determination is denied to nations such as Catalonia or the Basque Country in Spain, it is perfectly feasible in other European Union (EU) states, such as France, Denmark or the United Kingdom, which allow the exercise of this fundamental right in territories under its sovereignty. Dealing with these issues was the objective of the conference on the right to self-determination in which Catalan, Basque, Kanak, Scottish and Faroese cases were addressed. Members of parties and associations favorable to the self-determination of these territories and international experts in the matter participated in the conference.

On the Catalan side, the president of the ANC, Elisenda Paluzie, called on the EU to “have a coherent policy in response to the right to self-determination” and regretted that in the Spanish State “self-determination is a crime”. She also criticized that “in Spain today we find silence and indifference towards the violation of human rights”. The head of international affairs for Òmnium Cultural, Elena Jimenez, said that “we have the leaders of Omnium and the ANC in pre-trial detention for almost a year for organizing peaceful demonstrations two weeks before the referendum. This is another reason to affirm that human rights such as freedom of expression or the right to demonstrate are at stake in Spain”.

The parliamentary spokespersons Joseba Egibar (Basque National Party – PNV) and Maddalen Iriarte (EH Bildu) exposed the situation of Euskalherria. Both criticized that Spain has always opted for repression to face the desire for self-determination of a very important part of Basque society. “What Basque citizens demand should find a legal way”, Egibar said. Iriarte, meanwhile, recalled that PNV and EH Bildu represent the 60% of the Basque society and reminded to PNV that they have an extended hand to begin a process like the one in Catalonia. “We want an agreement with PNV to advance in the sovereignty way,” said Iriarte.

Meanwhile, Robin McAlpine, a member of the Scottish think tank Common Weal, said “we know that the EU is not perfect” and that “the future of Europe is weak, because of the silence on the suppression of democracy in some Member States”.

Regarding New Caledonia, Mickael Forrest, from the Front de Libération Nationale Kanak et Socialiste, expressed his satisfaction that on 4 November they will be able to hold a referendum on self-determination.

The conference was closed by several experts, who claimed the right to self-determination. Carlos Villán, former member of the Office of the United Nations High Commissioner for Human Rights, indicated that Spain has “the obligation” to respect the right to self-determination in Catalonia and insisted that the Spanish constitution “does not prohibit it but simply does not recognize it explicitly”.

In addition, he pointed out that “Spain cannot argue that Catalonia cannot be independent because Spain is a sacrosanct and inviolable territorial unit” because international law does not consider territorial integrity within the territory of a state but as a principle between states.

In turn, Fernando Burgés from the Unrepresented Nations and Peoples Organization (UNPO) explained that while the EU “has some problems” it should not be the case to “hamper the will of citizens of a European region that decides in a referendum in a democratic and peaceful way”. In addition, he also argued that “seceding from a specific state [like Spain] does not necessarily mean separating from the federation [EU].”

The expert also underlined that “you cannot ignore that there is a region that wants to be separated” and concluded that self-determination “should be seen as what it is: a fundamental right, not a parallel right”.