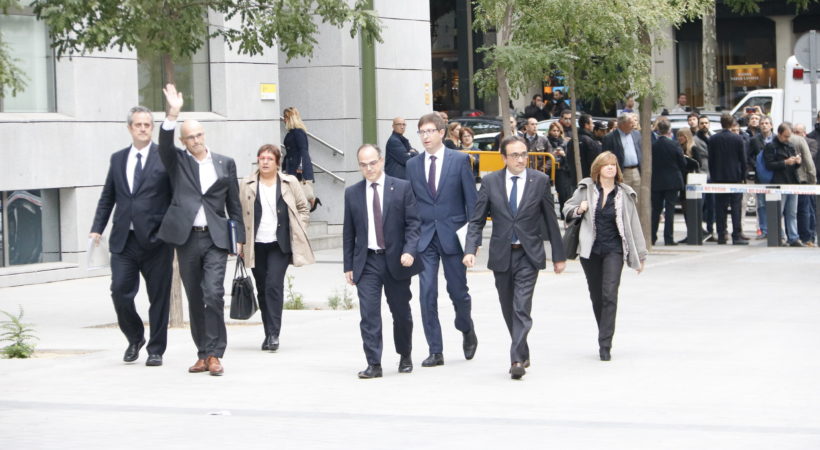 We, the members of the EU-Catalonia Dialogue Platform, want to express our deep concern about the request of the Spain’s prosecutor to demand a total of 177 years in prison for the Catalan pro-independence leaders, who have been in pre-trial jail for more than a year for having organized a referendum on self-determination on October 1st 2017.

On Friday 2nd of November, the attorney general of Spain’s Supreme Court, formally charged Oriol Junqueras, the former Catalan vice-president, with rebellion, and demanded a 25-year sentence for him. The former Catalan government ministers Joaquim Forn, Jordi Turull, Josep Rull, Raül Romeva and Dolors Bassa all face 16-year sentences. Jordi Cuixart and Jordi Sànchez, the President and the former leader of the two main Catalan grassroots movements respectively, and Carme Forcadell, the former speaker in the Catalan parliament, face 17 years as “promoters and leaders” of the rebellion.

According to the written accusation released, the defendants were “aware” that violence could have erupted during the attempt to bring about the independence of Catalonia, and they are accused of a “general uprising, leading to acts of force, aggression and violence.” Not only these accusations are false and made up to fit into a narrative that justifies the charge of rebellion, but they have also been refuted by the Belgian and German Courts, when they refused to extradite the former Catalan President Puigdemont (twice) and the Ministers in exile on the grounds of rebellion.

Catalan leaders have been accused of crimes they have not committed based on violence that has not existed. Rebellion is for instance that a Colonel from the Civil Guard entered armed and fired at the Congress of Deputies (1981). Furthermore, the fact that the press had access to the document before the lawyers of the defendants is, once again, a clear evidence of the many irregularities and violations of the rights of the defendants that are surrounding this cause.

The decision to pursue the most serious charges laid against the accused has destroyed any hope that the socialist government might lead to any meaningful negotiation on the Catalan issue. The lack of political response by the Spanish authorities is provoking dramatic consequences and we will do what it is in our hands to denounce it. There has been no crime; this construction has nothing to do with reality.

The trial is expected to be held early next year. If such sentences passed, this could set a dangerous precedent in Spain and in turn, in the European Union. The already shrinking position of the EU as guarantor of fundamental rights would be irreversibly affected; and its silence has also contributed to make European citizens feel that the European Institutions are far away and do not really protect them as they are supposed to.

For all these reasons, we want to make a call to the European Institutions to urgently reconsider what does protecting, promoting and guaranteeing civil and political rights mean to them. If they do not start making a gesture of responsibility to rebuild the European Union which was founded on the principles of liberty, democracy, respect for human rights, fundamental freedoms and the rule of law that pro-European citizens dream of, euroskeptical movements will fill the gap they are leaving by making false arguments of hope -as it is currently starting to happen-.