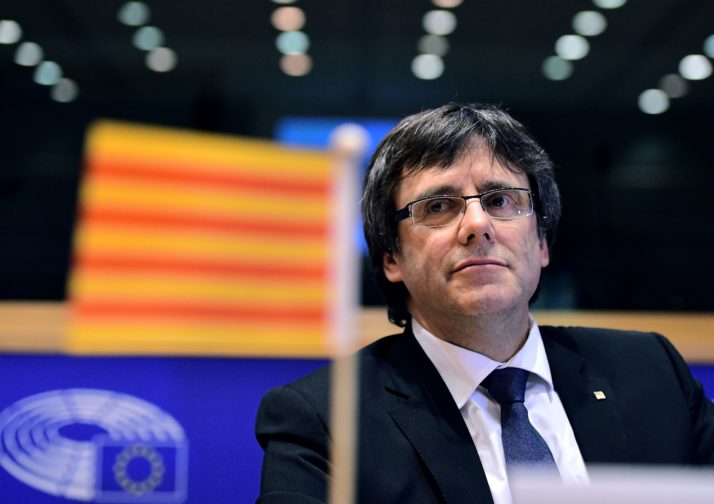 A Spanish judge has lifted the extradition order on the former Catalan president, Carles Puigdemont, and four former cabinet members who fled to Belgium to avoid charges of rebellion, sedition and misuse of public funds.

In a surprise move as campaigning officially began for this month’s Catalan election, supreme court judge Pablo Llarena withdrew European arrest warrants for the five, but national warrants still stand – meaning they would be likely to face arrest if they chose to return to Spain.Puigdemont said after the supreme court decision he would stay in Belgium “for the moment”.

Llarena said he had been moved to act after becoming aware of a discrepancy between Belgian and Spanish law that would limit the charges under which the Catalans could be extradited and therefore be charged on their return.

Sources in Brussels believe Puigdemont’s lawyer was preparing to argue that the definitions in Belgian law for the crimes of sedition and rebellion are different to those on the Spanish statute books. Extradition through the European arrest warrant in most cases requires “double criminality”, meaning the crimes must exist in the statutes of both countries.

The only charge on which the Belgians would have agreed to extradition was believed to be the lesser one of misuse of public funds for which the accused would be fined and banned from holding public office but not imprisoned.

Extradition to Spain under such conditions would mean that Puigdemont and the other four in Belgium would face different charges from ministers who stayed in the country and are currently either in preventive custody or out on bail. Their lawyers could also have used a Belgian ruling to argue for the most serious charges of sedition and rebellion to be dropped.

“As it appeared possible that Belgium might partially deny the detention order this raised the possibility of limiting the charges that could be brought against the fugitives,” Llarena said, as he withdrew the extradition request.

He said the crime was “perpetrated in concert by all those under investigation” and therefore all the defendants must be treated as a single, unified group.

Llarena also said, somewhat mischievously, that since the five had “shown a willingness to return to Spain to assume elected office” there was no reason to pursue their extradition.

National arrest warrants already been issued for Puigdemont, Toni Comín, Clara Ponsatí, Lluís Puig and Meritxell Serret, mean they could expect to be detained on their return to Spain and held in custody since they had already established they were flight risks.

Jaume Alonso-Cuevillas, Puigdemont’s lawyer, confirmed on Catalan television that “the moment Puigdemont sets foot in El Prat [Barcelona airport] or crosses the border he’ll be arrested and taken immediately to the supreme court”.

The ruling puts Puigdemont in a quandary as campaigning begins for the 21 December vote. He is a free man so long as he doesn’t go home and continues to campaign for president from Brussels.

But with Oriol Junqueras, his former number two and now his chief rival in prison in Madrid, the pressure is on Puigdemont to come back from what is now a voluntary exile in a Brussels apartment. If he stays in Belgium, he risks ceding the moral high ground to Junqueras.

Madrid has used the judicial system to manipulate and wear down members of the former Catalan government, locking them up then offering them bail if they recant October’s unilateral declaration of independence.

Junqueras was on Monday denied bail by a judge who said it remained to be seen whether his pledge to abide by Spanish law was “truthful and real”.