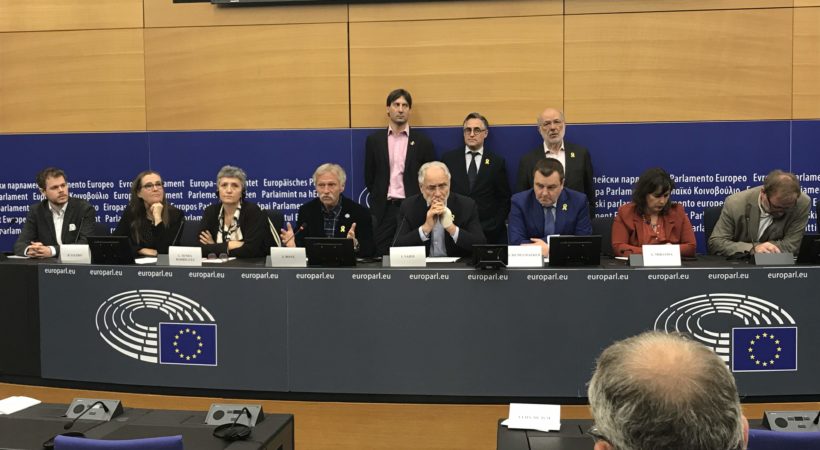 Members of the EU-Catalonia Dialogue Platform held a press conference in the European Parliament to present their report conclusions and recommendations on the observatory mission to the trial against the Catalan pro-independence leaders that took place on Thursday 28th of February.

“This trial should never have taken place as it is undeniably a trial of political dimension. This judicial process that criminalizes political opinions clashes with international law protecting Fundamental Rights.”, said MEP Mark Demesmaeker (ECR) during the press conference in Strasbourg.

MEPs also expressed their concerns on the conditions under which the prisoners are detained ; the judicial independence and impartiality of Spanish justice; and the treatment of the defendants’ lawyers, which are not allowed to show videos to prove wrong some of the witnesses.

“Spain is the only EU member state where there are political prisoners, who are incarcerated due to their political views. Their pre-trial detention should end and they sould be exonerated”, said MEP José Bové (Greens/EFA).

MEPs also insisted on the need to start a sincere dialogue between Spain and Catalonia fully respecting fundamental rights and international law, including the right to self-determination.

The report presented highlights several key elements that are especially worrying, pointing out that some actions of the Prosecutor could be considered as a breach of the right to a defence, and that, despite the fact that Spain has adopted legislation to ensure judicial independence and impartiality, in compliance with Council of Europe standards, problems remain in the way these standards are applied, leaving space for political influence over judiciaries and fuelling public perceptions of interference in the judicial process and bias among individual judges.