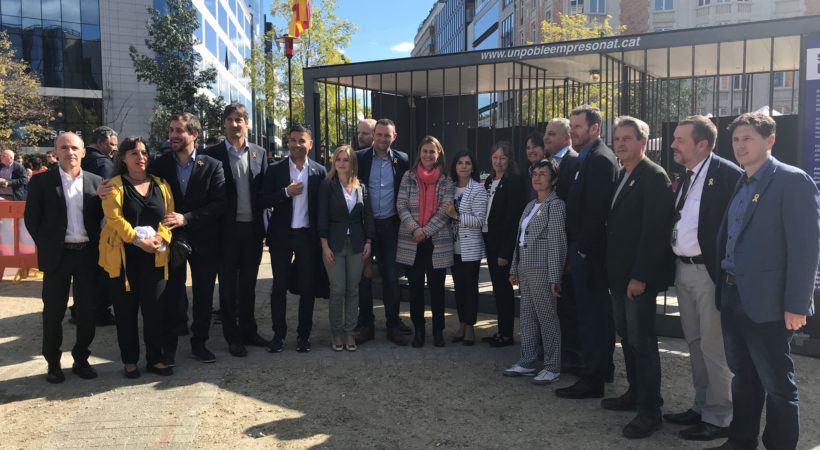 A group of members of the EU – Catalonia Dialogue Platform participated in the campaign “A people imprisoned” that took place outside the EU institutions in Brussels last Tuesday. Pro-independence organizations ANC and Omnium set-up a reproduction of a prison cell in order to focus international attention and highlight the clear democratic deficit of Spain and the deprivation of freedom ofCatalan social and political pro-independance leaders.

The group was formed by Izaskun Bilbao, Matt Carthy, Mark Demesmaeker, Jill Evans, Iosu Juaristi, Antonio Marinho, Ana Miranda, Jordi Solé, Ramon Tremosa and Ivo Vajgl. Other participants at the event included former President of the Catalan Government Carles Puigdemont and the three former ministers exiled in Brussels (Toni Comín, Meritxell Serret and Lluís Puig) as well as Josep Valtònyc, a musician in exile to escape prosecution by the Spanish state for his song lyrics, amongst others.

“A people imprisoned” campaign was launched in November 2017 following the imprisonment of civil society leaders and members of the Catalan government for organizing a self-determination referendum on 1st of October, and has, since then, travelled to 17 different cities.