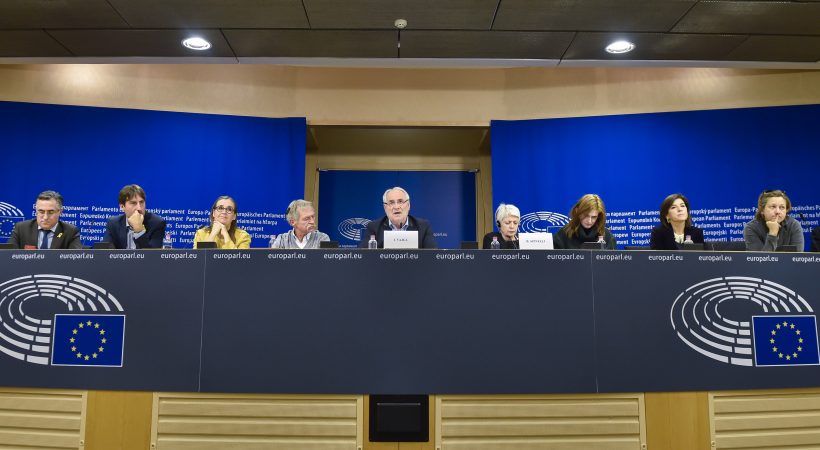 43 MEPs from 6 different Political Groups and 16 different Member States signed a “Manifesto for Dialogue in Catalonia”. They call on Spain’s judiciary to release the nine Catalan political prisoners, Germany’s judiciary not to extradite Carles Puigdemont and Belgium, UK and Switzerland not to extradite all the other Catalan politicians. The signatories also urge the EU institutions to mediate in the conflict between Catalonia and Spain in order to find a political solution.

The full text of the Manifesto is the following:

Manifesto for Dialogue in Catalonia

– Whereas on March 23rd, 5 Catalan MPs Jordi Turull, Carme Forcadell, Raül Romeva, Josep Rull and Dolors Bassa entered into pre-trial detention following the decision of the Spanish Supreme Court and a judiciary process was open on them on rebellion charges and supposedly misuse of funds. They risk between 15 and 25 years of prison;

– Whereas the 5 Catalan MPs are thus in prison before trial together with Quim Forn and Oriol Junqueras, also Catalan politicians and members of the Catalan Government who have been in pre-trial detention since November 2nd 2017. Also in pre-trial detention since October 16th are Jordi Cuixart and Jordi Sànchez, leaders of two of the largest pro-independence organizations in Catalonia. All of them are charged with rebellion too, risking from 15 to 25 years in prison;

– Whereas President and MP Carles Puigdemont was arrested in Germany after a European arrest warrant was issued by Spain on March 23rd. Clara Ponsatí is in Scotland while MP Toni Comín, Lluís Puig and Meritxell Serret remain free in Belgium and will cooperate with the judiciary. MP Marta Rovira and CUP spokesperson Anna Gabriel are exiled to Switzerland;

– Whereas the rebellion they refer to is the 1st of October referendum where, according to Human Rights Watch, 893 people were injured by the Spanish police and 2.100.000 people voted. All of the above, with the exception of Marta Rovira, Jordi Sànchez and Jordi Cuixart, have been members of the Catalan Government during the events or President of the Catalan Parliament in the case of Carme Forcadell;

Whereas on the legal side:

– as established in Article 472 of the Criminal Code, peaceful and orderly demonstrations do not constitute a crime of rebellion, which always entails violence and is punished with a sentence of between fifteen and twenty-five years of jail. The fact that rebellion does not apply to the present case was confirmed by Mr. Diego López Garrido, one of the experts who were in charge of drafting the content of this article;

– calling, organising and holding a referendum is not a crime in Spain. The Spanish parliament expressly legalised the matter by means of the Organic Law 2/2005, which modified the Criminal Code in order to remove those articles (506 bis, 521 bis and 576 bis), which had previously considered this matter a crime;

– the Spanish Government confirmed on February 26th that no public funds were used to organise the 1st of October referendum;

– according to Spanish criminal law, it is possible to stay in pre-trial detention up to 4 years;

We, the signatories, call on:

– Germany’s judiciary not to extradite Carles Puigdemont as the possibility of a fair trial is remote;

– Belgium, UK and Switzerland not to extradite Ponsatí, Comín, Puig,Serret, Rovira and Gabriel for the same reason;

– EU institutions to mediate in the conflict between Catalonia and Spain to find a political solution in the frame of a dialogue without pre-conditions.

Co-signatories of the Manifesto for Dialogue in Catalonia: