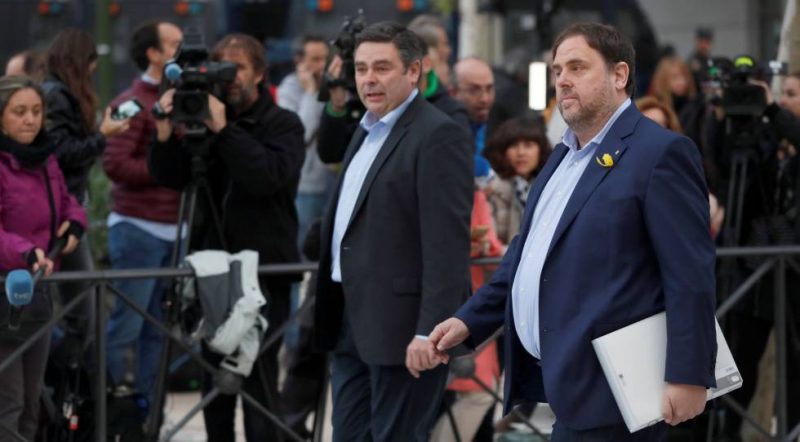 A judge from Spain’s National Audience court, Carmen Lamela, has without hesitation sent to prison Catalan vice-president Oriol Junqueras and ministers Jordi Turull(Presidency), Josep Rull (Territory), Raül Romeva(Foreign Affairs), Joaquim Forn (Interior), Carles Mundó(Justice), Dolors Bassa (Work) and Meritxell Borràs(Governance). They have not been offered bail. As expected, the public prosecutor had requested maximum penalties for the Catalan government and the judge accepted them. The judge, in her order, says that “the measure of prison pending trial is appropriate, reasonable and propocional”.

For minister Santi Vila (Business), meanwhile, the decision is lighter. The public prosecutor asked for bail of 50,000 euros in exchange for him not going to prison. Until he pays, however, he will go to prison too. Vila resigned last Friday evening after learning that president Carles Puigdemont was not going to call elections.

The judge argues that his resignation means that he cannot reoffend. In her order, Lamela writes that as it came the day before the unilateral declaration of independence, “it shows his wish against consummating the secessionist attempt”.

The judge has decided on prison without bail for the others due to what she describes as a flight risk, taking into account the “spending power of the accused which would allow them to abandon the territory” and highlighting the fact that “some [of them] have already gone to different countries, avoiding the criminal responsibility which they might have incurred”.

In fact, she suggests pro-independence organisations ANC (Catalan National Assembly) and Òmnium might help in such an escape and describes the government of Catalonia as “an organised group of people, with the support of sovereigntist associations with power and ability to help them in their possible flight from justice”.

Lamela also alleges there is a “high risk of reoffending and high probability that the accused might alter or destroy evidence”.

Santi Vila has stood out from the other members of the government since first thing this morning. As well as arriving by himself and with a different lawyer, once within the courtroom he used a different defence strategy to his former colleagues. Whilst the vice-president and ministers only responded to their lawyers and were in the room for only 5 minutes, Vila responded to everyone and spent the longest time testifying, some 45 minutes. The ministers will all be sent to different prisons.

The judge is harsh in her 19-page order justifying her decision: “The role which all the accused played from their public roles takes on special importance, without which the independence process couldn’t have moved forward”.

Lamela says that the ministers’ actions were “pre-meditated and perfectly prepared and organised, repeating during more than two years the systematic violation of the resolutions of the Constitutional Court in favour of independence”.

As for Joaquim Forn and Jordi Turull, names ministers on 14th July this year, the judge says that “they cannot be ignored the multitude of actions which, in the development of the independence process, were carried out from the date cited until the 27th October”.

Lamela is implacable: “The accused played active roles, driving the minutely designed sovereignty process and crossing all sorts of barriers that could have turned them away from their ultimate aim”.