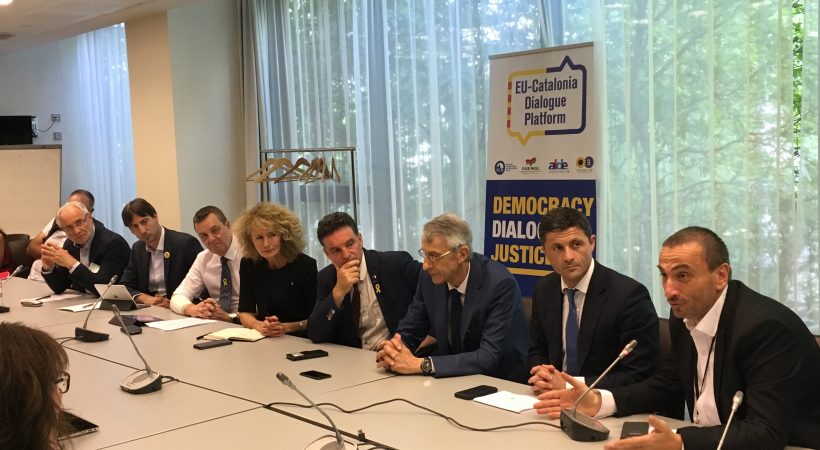 After Brussels, Barcelona and Berlin, EU-Catalonia Dialogue Platform, formed by more than forty MEPs from different groups and countries, has been presented in the National Assembly of France, in Paris.

The spokesman of the platform, MEP and former Slovenian Foreign Minister Ivo Vajgl, highlighted that the meeting has been done the same day that some of the prisoners were being transferred to Catalan prisons. Vajgl has clarified that, even the fact that it is an “important and symbolic step”, it only can be “a first step” to achieve their release.

For his part, Jordi Solé, member of Esquerra Republicana de Catalunya, explained that the fact of being able to establish an interrelation with deputies from other countries is “very important for the Platform”. “In these meetings, we receive solidarity and understanding when we defend that, in the EU, political conflicts need a political solution and that means dialogue and negotiation” he ensured. According to him, many people “share” this idea even though the “institutional and official” EU is turning its back.

Another MEP that has gone to Paris has been Mark Demesmaeker, who has shown his deep concerns about the situation in Catalonia and has vehemently condemned the violation of rights in a european Member State.

Solé has explained that next meetings planned by the platform of MEPs could be in other capitals like Madrid, London, Stockholm or Viena.

The reaction of the French MPs

On the other side, several French MPs that have attended to the meeting have also denounced the imprisonment and the exile of Catalan politicians. The French deputies were from Peuples Solidaires (RPS), La République en Marche (ReM) and the Greens. They have expressed their “solidarity” to MEPs; have claimed the dialogue as a solution in the conflict in Catalonia; and also demanded the release of the prisoners.

“For us, it is a violation of the right to self-determination and a infringement of other rights that are fundamental in France and in the EU” said the MP Jean-Felix Acquaviva. On the other side, the deputy for Alsace, Martine Wonner, from ReM – the party founded by the French Prime Minister, Emmanuel Macron, has said that it is “inadmissible” the fact that there are politicians in prison or in exile for nine months just for “defending different ideas”.

“For me it is very important to be here supporting Catalonia because I am always going to be supporting the defense of freedom of expression” argued Martine Wonner. According to the deputy, it is “fundamental” for Europe to “show solidarity” with the situation that are facing Carles Puigdemont and his government. In this regard, she said she “will forward the message” to the Élisée and the French Prime Minister, Édouard Philippe, in the following days.