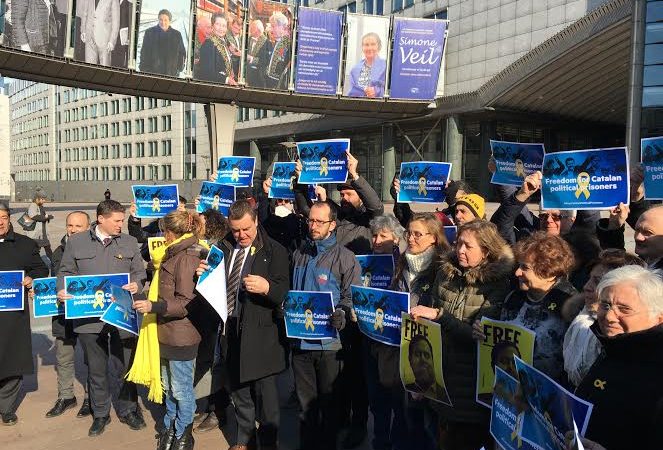 The EU-Catalonia Dialogue Platform, as a group of MEPs that works to achieve a democratic solution and a respectful dialogue between the Spanish and the Catalan governments, calls for the urgent release of Catalan political prisoners and expresses its total rejection and disagreement regarding the situation they are facing in jail. The platform will submit a new request to visit the prison after penitentiary officers denied them entry last 19th December of 2017.

Oriol Junqueras, Joaquim Forn, Jordi Cuixart and Jordi Sànchez are accused of serious charges such as sedition, rebellion and are facing long prison sentences of up to 30 years. In the Spanish Constitution, as in other democratic constitutions, these charges must involve the active use of violence. It is evident that, in the Catalan case, violence has not been present at any moment of this democratic political process. Indeed, Diego López Garrido, the drafter of the Constitutionalarticle that describes the crime of rebellion, declared that “it can’t be applied to the Catalan case due to the lack of violence”. The platform wants to highlight that the only evidence of violence has come from the side of the Spanish Government, led by Mr Mariano Rajoy, during the 1st of October. According to Amnesty International, the Policía Nacional and Guardia Civil, under the command of the Ministry of Interior, used excessive force against peaceful people leaving more than 1.000 people injured. Thus, we strongly believe that the four inmates are political prisoners and they are being punished for their political and democratic convictions. In this respect, the platform wants to point out the report of Col·lectiu Praga, subscribed by 650 lawyers, that denounces several violations of the European Convention of Human Rights and Fundamental Freedoms (ECHR) in Catalonia and the abuse of the Spanish courts to sort out a dilemma that hasn’t got a legal nature but political.

The EU-Catalonia Dialogue Platform condemns the fact that four political prisoners are being unfairly held in provisional custody without either a trial or strong legal reasons or evidences that could justify their imprisonment. The nature of their punishment becomes obvious when we take into account that they have been imprisoned at 700km from home; that a person with strong religious convictions like Oriol Junqueras is arbitrarily prevented from attending Mass; that Joaquim Forn has been severals days without heating and hot water facing very low temperatures; or that the prison officers apply a restrictive and unprecedented policy regarding visits.

In fact, last December, the EU-Catalonia Dialogue Platform followed a lengthy process in order to organise a visit of 7 MEPs to the prison of Estremera. After one month of bureaucratic procedures, once the delegation was at the prison’s gate, access was denied. It is evident that there is a lack of willingness to facilitate visits to the prisoners. The platform wants to take this opportunity to announce that it won’t give up. As representatives of European citizens, we have the right to, freely, carry out this visit to the Catalan political prisoners. For this reason, the EU-Catalonia Dialogue Platform is going to start once again a new process in order to visit them in the following weeks.