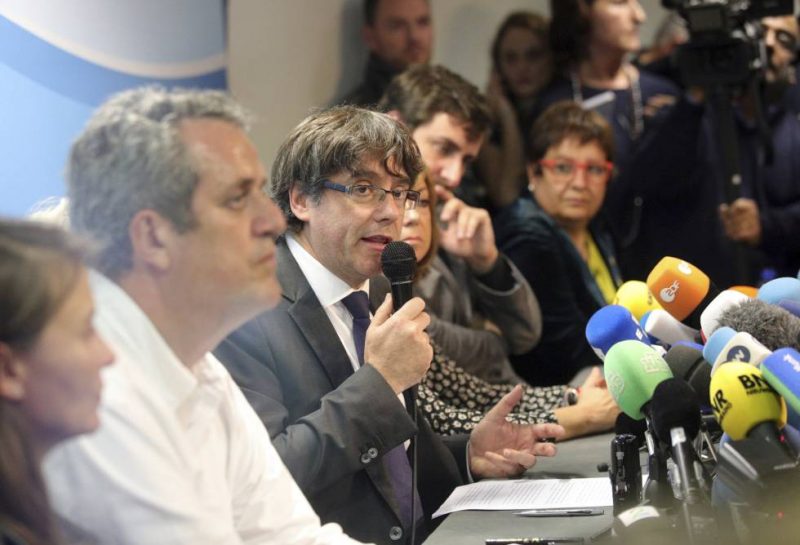 Catalonia’s ousted president and several members of his deposed cabinet fled to Belgium hours before Spain’s attorney general asked for charges of rebellion, sedition and misuse of public funds to be brought against them over their decision to declare independence last week.

Shortly after the possible charges were announced on Monday, Spanish media reported that Carles Puigdemont and five of his former ministers had driven to Marseille and then caught a flight to Brussels.

Puigdemont’s presence in Belgium was confirmed on Monday night. On Tuesday morning, a Belgian lawyer acting for the sacked leader said he would give a news conference at 12.30pm.

Paul Bekaert told Reuters Puigdemont was considering seeking asylum but it was not certain. “We have not yet decided yet. We have a lot of time to decide,” he said. “We will see in the coming weeks what we are doing.” There was also speculation that the Catalans could be intending to set up a government in exile.

In an apparent reference to Josep Tarradellas, the Catalan leader who lived in exile in Paris during the Franco dictatorship, a spokeswoman for Puigdemont’s Catalan Democratic party said: “We had presidents in this country who were not able to be here during Franco’s time and they were still the president of the Catalan government.”

Over the weekend, Belgium’s immigration minister suggested that Puigdemont could be offered asylum in the country. “It’s not unrealistic, looking at the current situation,” Theo Francken, a member of the Flemish separatist N-VA party, told the Flemish-language broadcaster VTM on Saturday.

“Looking at the repression by Madrid and the jail sentences that are being proposed, the question can be asked whether he still has the chance for an honest court hearing.”