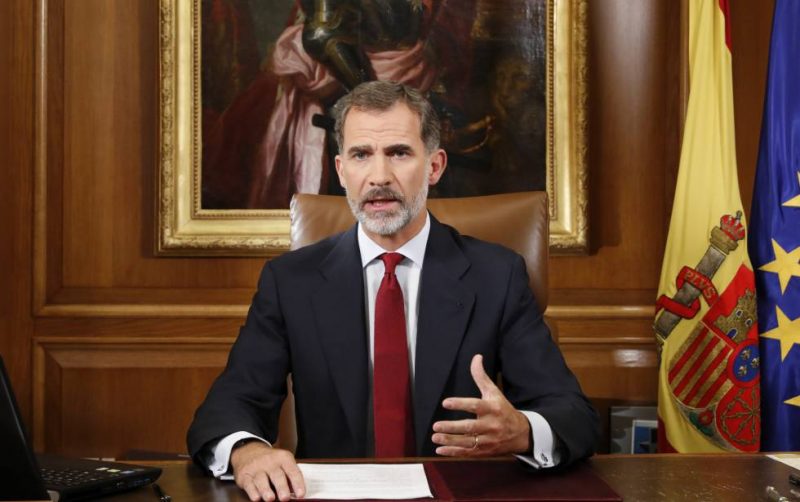 Felipe’s dramatic intervention late Tuesday aimed to calm Spain’s deepest political crisis in decades, but risked further fanning resentment and tensions in the region. He spoke after hundreds of thousands of Catalans rallied in fury at violence by police against voters during a banned referendum on independence for their region on Sunday.

The central government and national courts branded the referendum illegal. But Catalan leaders claimed the results showed the region had the right to secede and said they may unilaterally declare independence.

Felipe, 49, abandoned his previously measured tone over tensions with Catalonia, accusing its leaders of acting outside the law. “With their irresponsible conduct they could put at risk the economic and social stability of Catalonia and all of Spain,” he said. “It is the responsibility of the legitimate state powers to ensure constitutional order.”

‘Fuel to the fire’

Felipe repeated his earlier calls for harmony between Spaniards. But after Sunday’s violence it was a delicate balancing act for a Spanish sovereign.

People watching in a bar in Barcelona whistled and booed after the king’s speech. “It is a real disgrace… Far from solving anything it has added fuel to the fire,” said Domingo Gutierrez, a 61-year-old trucker. “He did not say a word about the people who were injured… I have never been pro-independence, my parents are from Andalucia. But now I am more for independence than anyone, thanks to people like that.”

Police unions and political experts warned that Spain’s government risks losing control of the north eastern region. It is considered Spain’s worst political crisis since an attempted military coup in 1981. That was defused by Felipe’s father, King Juan Carlos I, also in a stern television appearance.

Hundreds of thousands of protesters in Barcelona on Tuesday yelled for national security forces to get out of the region, branding them “occupation forces”. In Sunday’s disturbances, Catalan regional leader Carles Puigdemont said nearly 900 people had received medical attention, though local authorities confirmed a total of 92 injured.