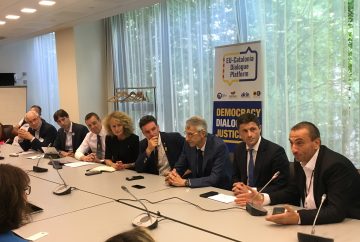 After Brussels, Barcelona and Berlin, EU-Catalonia Dialogue Platform, formed by more than forty MEPs from different groups and countries, has been presented in the National Assembly of France, in Paris. The spokesman of the platform, MEP and former Slovenian Foreign Minister Ivo Vajgl, highlighted that the meeting has been done the same day that some … END_OF_DOCUMENT_TOKEN_TO_BE_REPLACED 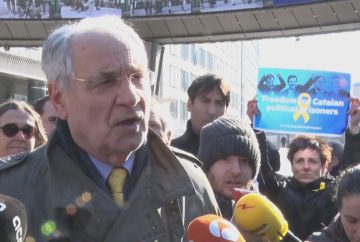 Ivo Vajgl: « Today, Spain is behaving like an authoritarian regime »

As a Members of the EU-Catalonia Dialogue Platform, we want to express our profound indignation and strongly condemn the decision taken by the judge Pablo Llarena who sent to pre-trial prison five former Catalan Ministers. We call on the Spanish government to stop immediately the ideological and political persecution against Catalan pro-independence leaders and we … END_OF_DOCUMENT_TOKEN_TO_BE_REPLACED 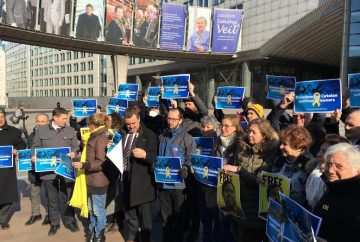 The EU-Catalonia Dialogue Platform, as a group of MEPs that works to achieve a democratic solution and a respectful dialogue between the Spanish and the Catalan governments, calls for the urgent release of Catalan political prisoners and expresses its total rejection and disagreement regarding the situation they are facing in jail. The platform will submit a new request to visit the … END_OF_DOCUMENT_TOKEN_TO_BE_REPLACED

Oriol Junqueras from jail: « We must unite to retake control »

Catalan vice-president Oriol Junqueras, held in pretrial detention without bail in Estremera prison near Madrid for now over a hundred days, has defended the unity of the independence movement to « get our government back ». « It is the sum of many actors and social sectors, among them the leaders of parties », he said about the movement, « that … END_OF_DOCUMENT_TOKEN_TO_BE_REPLACED

Puigdemont: « Spain is trying to ignore the Catalan election results »

Following his visit to Copenhagen, acting Catalan president Carles Puigdemont, has made another public appearance, this time at an event in Flanders. The leader of the JuntsxCat parliamentary group attended the « New Year » reception held by the N-VA (New Flemish Alliance), the largest Flemish nationalist party, in the city of Lennik, about 30 kilometres west of Brussels. Received with … END_OF_DOCUMENT_TOKEN_TO_BE_REPLACED

Catalan pro-independence parties have held their absolute majority in snap regional elections, dealing a severe blow to the Spanish government, which had called the polls in the hope of heading off the secessionist push. The deposed Catalan president, Carles Puigdemont, described the result as a “a slap to the face” to the Spanish prime minister, … END_OF_DOCUMENT_TOKEN_TO_BE_REPLACED

A Spanish judge has lifted the extradition order on the former Catalan president, Carles Puigdemont, and four former cabinet members who fled to Belgium to avoid charges of rebellion, sedition and misuse of public funds. In a surprise move as campaigning officially began for this month’s Catalan election, supreme court judge Pablo Llarena withdrew … END_OF_DOCUMENT_TOKEN_TO_BE_REPLACED

A Spanish judge has issued an international arrest warrant for Catalonia’s ousted president a day after she jailed eight members of the region’s pro-independence government pending possible charges ove last week’s declaration of independence. In the latest twist in Spain’s worst political crisis in four decades, a national court judge on Friday issued a European … END_OF_DOCUMENT_TOKEN_TO_BE_REPLACED

A judge from Spain’s National Audience court, Carmen Lamela, has without hesitation sent to prison Catalan vice-president Oriol Junqueras and ministers Jordi Turull(Presidency), Josep Rull (Territory), Raül Romeva(Foreign Affairs), Joaquim Forn (Interior), Carles Mundó(Justice), Dolors Bassa (Work) and Meritxell Borràs(Governance). They have not been offered bail. As expected, the public prosecutor had requested maximum penalties for the Catalan government and the judge accepted them. The judge, in her order, says that … END_OF_DOCUMENT_TOKEN_TO_BE_REPLACED