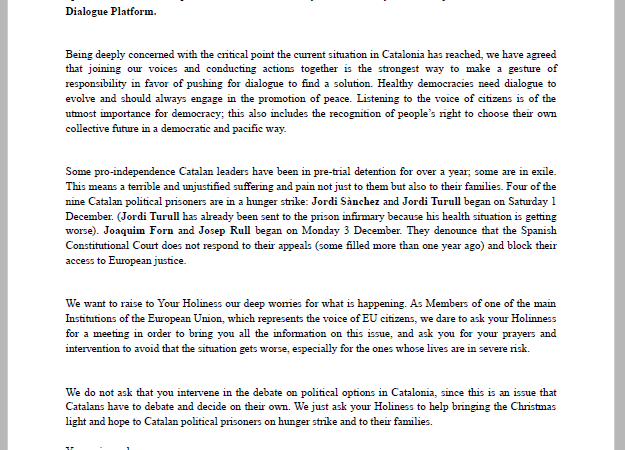 This week the EU–Catalonia Dialogue Platform has sent a letter to His Holiness, Pope Francis, asking for his mediation in the Catalan crisis.

The letter, signed by the chair of the Dialogue Platform, Mr Ivo Vajgl (ALDE), expresses the deep concern of the Members of the European Parliament that are committed to this Platform, “of the critical point that the current situation in Catalonia has reached”. The MEPs of the Dialogue Platform state that “healthy democracies need dialogue to evolve and should always engage in the promotion of peace. Listening to the voice of citizens is of the utmost importance for democracy; this also includes the recognition of people’s right to choose, in a democratic and pacific way, their own collective future”.

The EU–Catalonia Dialogue Platform reiterates its concern regarding the current situation of the Catalan pro-independence leaders in pre-trail jail, four of whom (Jordi Sànchez, Jordi Turull, Joaquim Forn and Josep Rull) are in the midst of a hunger strike to denounce that the Spanish Constitutional Court does not respond to their appeals, blocking their access to European justice.

The letter makes clear the “preoccupation for this situation” and asks the Pope “to help bringing the Christmas light and hope in the Catalan political prisoners on hunger strike and to their families”.

Finally, the letter asks the Pope “for a meeting in order to bring all the information on this issue”, and asks His Holiness for His help in order to intervene to avoid that this situation does not worsen, “especially for the ones that put their lives in risk with the hunger strike”.